Predestined for Eternity: Hope for the Church 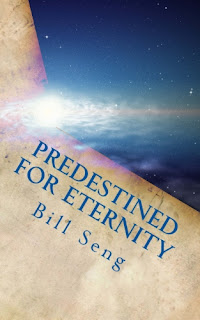 It brings me great pleasure to present to you my new book, Predestined for Eternity. This book has been a journey, as have my other works thus far. In this book I seek to answer questions regarding the nature of Predestination and Free Will. Within the mainstream church, we see these issues as divisive. But within the scope of God's Word, they should bring a sense of wonder, awe, and humility that results in unity.

I believe it is foolish to dismiss the reality of either Predestination or Free Will when reflecting upon God's grace upon human kind. In Acts 17:26-27, we see both referred to by the Apostle Paul (albeit, not by name), "And he made from one man every nation of mankind to live on all the face of the earth, having determined allotted periods and the boundaries of their dwelling place, that they should seek God, in the hope that they might feel their way toward him and find him. Yet he is not far from each one of us."

Ravi Zacharias has pointed out that the Bible frequently speaks about these two aspects of salvation side-by-side. He refers to it as God's Sovereignty and Man's Responsibility. If God did not judge, he would not be entirely sovereign. But if mankind were not responsible for some aspect of salvation, they could not be judged. And yet the Scriptures tell us that everyone is without excuse. When we deny God, we are gravely responsible for rejecting God's only Son. It is on this basis that we are condemned. But without God's Spirit, we would be unable to receive Jesus as Lord and Savior.

Most people see predestination and free will as being mutually exclusive concepts. In Predestined for Eternity: The Truth about Predestination and Free Will, you will learn that they work complimentary, one to the other, in a manner that secures God the maximum amount of glory.
Posted by William Seng at 11:34 PM No comments:

The Good, the Bad, and the Ugly of Zootopia 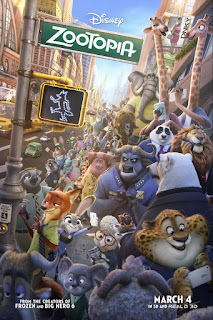 I have to start off by saying that Disney's Zootopia was another display of Disney's brilliance. It was a fun and entertaining movie that exhibited the type of originality that it seems only Disney is capable of delivering these days. So let's have a run down of what makes Zootopia Good, Bad, and Ugly.

The Good
You leave this movie feeling good. It is the story of a bunny who is trying to prove herself worthy of the police force of Zootopia. She's characterized as a small town girl with big dreams that will stop at nothing to fulfill those dreams. Along the way, people try to discourage her. Aside from wanting to prove herself, she believes she can genuinely serve the world by being a courageous and hardworking police officer.

There is an element of redemption for her co-star, Nick the Fox. Fox's are sneaky creatures that have a bad reputation. Nick grew up enduring the school of hard knocks and has given in to the stereotypes that label him as a dishonest, rotten, predatory scoundrel. Through his relationship with officer Hops (the main character) it is discovered that he has a good heart underneath his rough exterior.

The Bad
EVOLUTION!!! Does every kids movie have to start off with an evolutionary premise anymore? Perhaps it is more subtle in this movie, but for minds like mine that have been trained to spot such propaganda, it is dead obvious that evolution is driving force in the movie. It is mostly rooted in the reality that the predators used to be savages, but have now become civil. I await the day that evolution fulfills its destiny of becoming nothing more than a fairy tale that is only used to make sci fi and fantasy stories more interesting. As it is currently used, its employed as a mild form of brainwashing.

The Ugly
Something about Police Officers stereotyping animals according to their species and certain species justifying their ill behaviors according to what they are might make some people uncomfortable. I will also warn you that there is full blown animal nudity in this movie...like totally naked animals on a secret nudist reserve. Cover your eyes for this scene (It's actually quite comical). Also...implied inter-species relationship...I'm not going to spoil this right now but, again, it's a children's cartoon. So don't worry.

The movie is brilliant. I highly recommend it for families, although I would suggest that parents point out the evolutionary implications to their kids. It kept my two year old's attention for the whole movie, so you know it has to be good.
Posted by William Seng at 8:44 PM No comments:

May 1, 2016 was a good day to reflect upon creation and its Creator.

Today at Gateway, we started a series on the Apostles Creed. The first part of the Creed, "I believe in God the Father Almighty, Creator of heaven and earth." As a result of this, the emphasis of the sermon by Pastor Adam Borsay was focused on the doctrine of God as the Creator.

Pastor Borsay did an excellent job of summing up the importance of this Church doctrine. Where others would have taken the route of preaching a message that focused on evidences for God, he focused on the sovereignty of God. Personally, I was pleasantly surprised by this take on this doctrine. With all of the controversy concerning where the universe came from, I expected something that addressed a multitude of evidences. Instead, we received a well-delivered message that assured us of God's sovereignty and control over the entire universe. Wow! It was a powerful message. It included a call to action to not only state our belief in God, but as our Sovereign Creator we should willfully and joyfully devote our time to him in whatever we do.

Later on May 1, Dr. Disilvestro from The Ohio State University spoke to the church concerning various evidences of creation. I was thoroughly pleased that several of those evidences (beginning of the universe, anthropic principle, and the complexity of living organisms) are also noted in my book 10 Irrefutable Proofs of Creation. The other two evidences were strictly Biblical: The Biblical Creation Account and the Resurrection of Jesus. These two were a good reminder that although the world has its form of wisdom, it is only in God's Word that we find truth. Disilvestro delivered his message in a gracious and professional manner.

Today rekindled my passion for this doctrine/debate once again. Check out the blog section on my webpage, www.williamhseng.com, and find out what I have to say on some of these topics!
Posted by William Seng at 8:22 PM No comments: