The Wrath of Giganotus Rex: Profile for William Martin Stevens 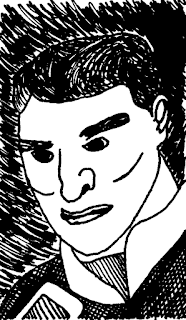 William Martin Stevens is a reporter who lives in the city of Midland. He is the son of Martin and Audrey Stevens and is an only child. His father, Martin, was a renowned journalist in his day and was the inspiration for William to pursue a career in media. Audrey worked alongside Martin at Global Media, but as a stage hand for some of its station's broadcasts.

Because of his inherent talent, the Rulers determined early on that he would make an excellent journalist. He works for Global Media and writes a popular column in the Global Media Journal known as A Dose of Reality. His column deals with some of the more controversial topics of the day, sometimes even to the point of violating the speech laws, set by the Rulers. He is hard-working and is eager in his search for the truth.

William's boss, George, keeps a close eye on him. He reports regularly to the authorities to ensure that William's columns are not violating speech laws. This has resulted in some of Mr. Stevens' articles being censored or scrapped. He has been flagged as being a potential renegade, as he writes on topics that most reporters would avoid. Nonetheless, his unique style of reserving judgment and writing in the Rulers' favor has brought stability to his career.

He has recently been assigned to gather information from the Village of Orwell concerning a possible uprising. He has not yet returned from his first visit, but certain reports indicate that something out of the ordinary has occurred. There are not many details about the incident, at this time; however, early reports indicate a military conflict has claimed the lives of multiple soldiers.

The news concerning the conflict is nothing more than a rumor, but radio communication through military sources have revealed some bizarre details about what happened. These transmissions include soldiers saying that people are being swallowed up by the ground, tanks are being melted into scrap, and people are running from an enormous creature of some sort. This report would be dismissed as a hoax, except for the fact that the creature's roar can be heard in the recordings of these transmissions.

The government has linked Mr. Stevens and the Orwellians to the event in the Village of Orwell. Both must be monitored closely from this point forward. As chaos ensues, what news story will remain?

Follow the story of William Martin Stevens and find out the answers to these questions in The Wrath of Giganotus Rex.

www.williamhseng.com
Posted by William Seng at 10:24 PM No comments:

The World of Giganotus Rex

In my new book, The Wrath of Giganotus Rex, the world in which the characters live is significantly different from the world in which you and I live. Frighteningly enough, you might not find some of the differences to be too profound.

The events of Giganotus Rex take place long after a catastrophic war takes place, known as "The Great Cleansing." Not many details of this war are known, but its ramifications left the world in ruins. Only one nation is left standing, and the people have been divided up into communities, according to the roles that they have in society.

The technology of this world is very advanced, including transportation and communication, but it is very limited. It some cities, it appears that mankind has gone backwards in advancements. In the ruler's city, the technological marvels, particularly with the military's weaponry, may leave you speechless.

The government is the one benevolent force protecting the descendants of the survivors of the Great Cleansing. Society operates like clockwork. Everyone has a place in this new world in which all people work together to preserve the human race. Everything seems to be under control, until rumors sprout up, concerning a rebellion being mounted by the people of the village of Orwell.

The people in the world of Giganotus Rex are anything but superstitious. There are remnants of religious beliefs that have survived in certain cities, but the majority of people do not believe in the supernatural. The lack of belief makes it even more surprising when Giganotus Rex arrives on the world stage.

It was once thought that the stories of old were meant to scare people. Ancient people would teach that you were to do "the right thing" or the boogeyman might get you. But what if you don't do the right thing and the monsters are real?

There is more to Giganotus Rex's existence than what meets the eye. Although most of the world fear him, some appear to be anticipating his arrival. Are the people prepared to defeat this monster? Find out in The Wrath of Giganotus Rex.

www.williamhseng.com
Posted by William Seng at 4:50 AM No comments:

What is a Monster: The Wrath of Giganotus Rex

You have heard of the Loch Ness Monster, Bigfoot, the Chupacabra, and other monsters of folklore and legend. You have heard legends of dragons, trolls, sea monsters, and other incredible beasts. The word monster is used quite often, but what is a monster? Is a monster just some form of unidentified creature, or is it something more? A quick Google search will tell you that a monster is "an imaginary creature that is typically large, ugly, and frightening." Although this might be true, in a general sense, it doesn't really capture the significant role in culture that monsters play.

When you observe monsters of ancient lore, you will discover that they were more than just a means of entertaining the masses. They were used as symbols to explain a social ill or to foreshadow an event that would soon take place. Many cultures believe monsters to be signs. In the case of King Arthur, legend has it that a dragon attacked his kingdom shortly before his son would rebel against him in a battle that would ultimately claim both of their lives. The dragon was a foreshadowing of things to come. But monsters were not exclusive to ancient times.

Take a look at pop culture. There are many movies that portray monsters of various shapes and sizes. In the South Korean masterpiece Gwoemul (known in English as The Host), a monster emerges from the Han River to wreak havoc among Seoul's population. The monster itself was just a manifestation of the real issues being exposed during the movie. The real messages being communicated, through the chaos the monster created, were the deterioration of the family unit, the horrors of an over reaching government, and the consequences of mass pollution. Defeating the monster required the characters to come together as a family, overcome the government's invasion of private matters, and face their nemesis out in broad daylight. It was not the monster that needed conquered, but the wickedness of the human condition.

In a matter of days, I will be releasing a book featuring a monster of colossal proportions: The Wrath of Giganotus Rex. Giganotus Rex (G. Rex) is a monster that takes mankind by surprise and creates chaos that puts humanity's existence in the balance. He has the power to reduce cities to a burning heap of ash and makes light of the forces that oppose him. Like all monsters, G. Rex is after something. In the midst of all of the chaos, reporter William Stevens takes it upon himself to expose the secret of G. Rex and save the human race. Only one question remains, "Is humanity willing to do what it takes to rid itself of G. Rex?" Find out the answer in The Wrath of Giganotus Rex.

Posted by William Seng at 6:12 AM No comments: